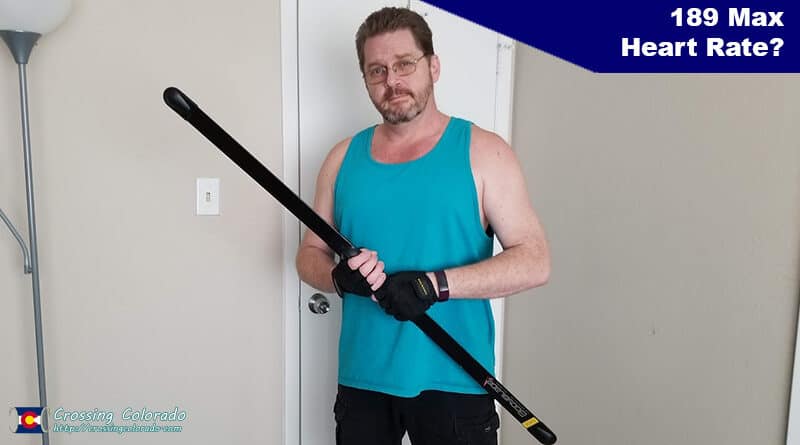 Lately, I’ve been putting in a bit of effort using the exercise equipment my good friend gave me. And today, I hit my max heart rate with the Bodyblade. I can tell you, it was quite a grueling workout!

But, that’s because I don’t necessarily use the device like they advertise on TV.

Don’t get me wrong, I’m sure it’s a great fitness unit by itself. However, I’m not a fan of just standing in place wiggling a piece of metal.

No, I really throw myself into the game, as I do with almost every other exercise.

What's In This Post... hide
How Did I Hit a 189 Max Heart Rate with a Bodyblade?
Adding a Massive Amount of Movement
Imagining Dance Routines
Make Sure There is Plenty of Room
How Much of an Impact Did this Make On Me?
Worked Up a Decent Sweat
Feeling it in My Muscles
Being Careful Not to Hurt Yourself
Start Slow
Only Increase to Your Comfort
Getting the Heart Rate Up with a Bodyblade without Boredom

How Did I Hit a 189 Max Heart Rate with a Bodyblade?

If you’ve seen the ads on TV or YouTube, it doesn’t look like you’ll really work up a massive sweat playing with the Bodyblade. It’s easy and doesn’t take a lot of thought to bounce the unit.

However, I’m the type of person who’s always looking for a way to maximize and gamify any workout. And you can do an awful lot to boost the experience when using the Bodyblade.

Adding a Massive Amount of Movement

One thing that has worked well for me while playing the Xbox Kinect is keeping my body in motion. I brought that same mentality when using the Bodyblade.

I don’t just stand in one spot. I am bouncing back and forth, walking in place, and shifting my body weight while keeping the device in motion.

This easily increases my heart rate while using the Bodyblade. In reality, I add anything from squats to stretches during the workout.

As goofy as it may sound, I often imagine myself doing dancing routines with the Bodyblade and how it would look on camera. Essentially, I’m choreographing the steps in my mind.

One idea I’m toying with is uploading my workout videos to YouTube using the Bodyblade to music. Since I’m not monetized anyway, I don’t have much to worry about record companies claiming the video.

It’s kind of funny, but the videos would show exactly how much effort I put into playing with exercise equipment.

Make Sure There is Plenty of Room

And lastly, I make sure there is plenty of room for me to move and dance about. The last thing I want to do is smack the television or blacken someone’s eye with the end of the device.

And since I am constantly in motion, I kind of need a lot of space for my dance routines. Otherwise, I don’t get my heart rate up enough with the Bodyblade.

Just standing in place with the workout chart that comes with the unit, my heart rate will only increase to about 125 on average. To hit that 189 threshold, I was all over the room.

How Much of an Impact Did this Make On Me?

How much of a workout can you get by jumping around like an idiot with the Bodyblade? Well, a lot more than you’d think. In fact, it did a lot more than just vastly increase my calorie burn per minute.

Worked Up a Decent Sweat

Obviously, when your heart rate hits 189 and your average for the entire 23 minutes sits at around 145, it’s a sign you’re working up a sweat. Well, at least it is for me.

Out of all of the games and workouts I’ve done, today’s session ranks right up there with playing Virtual Smash while wearing weighted gloves.

To cool down, I went for a 10-minute walk around the backyard with the dog. Seeing how it’s February in Colorado, the sweat in my hair began to freeze.

Feeling it in My Muscles

Because of how I dance while keeping rhythm with the Bodyblade, I can easily feel the workout in various muscle groups.

In this instance, I feel the burn in my:

Throughout the entire session, I am working out and only stopping for a few seconds to get a drink in between songs.

I usually tend to side on working for stamina and seeing how long I can sustain an activity before I am too exhausted to move. Which isn’t always a good thing as I am prone to hypoglycemia.

In fact, here it is two hours later and I can still feel the burn in my biceps and abs.

Being Careful Not to Hurt Yourself

Let me put a disclaimer here. I am able to go hog-wild and raise my heart rate with the Bodyblade in this fashion because I’ve spent a lot of time knowing how far I can push myself.

I don’t recommend taking the exercise to the extreme like I do right off the bat. You run the risk of hurting yourself or causing damage to the home.

As silly as it may sound, I have whacked the ceiling in my old house more than once while playing with the Bodyblade.

I started by simply standing and watching TV while using the unit. I also tried some of the poses that are demonstrated in the plan you get from the manufacturer.

One of my favorite sayings is, “A man’s gotta know his limitations.”

Starting with slight movements back and forth, I created a routine that works best for me. Nowadays, I know just how far I can push a Bodyblade workout without hurting myself or hitting objects around me.

Don’t jump into the process like a Scottish Highland warrior. Start easy and work your way up.

Only Increase to Your Comfort

Only perform the movements with which you’re most comfortable. Not everyone has the same flexibility, and it may take some time to get to a certain point.

As I said, I started with simple side-to-side, back-and-forth movements to test my own abilities. This is because the Bodyblade does require a good rhythm and balance when you start moving about.

Add the motions as you get more comfortable using the unit.

Getting the Heart Rate Up with a Bodyblade without Boredom

When I saw that I broke my record for maximum heart rate, I geeked out a bit. I really threw myself into the routine today, and look forward to doing it again in a couple of hours.

To be honest, I never thought I could peak my heart rate with the Bodyblade. It seemed like such a simple tool. And perhaps the dancing around is the biggest contributor.

But I tell you, adding the Bodyblade makes a massive difference in how my muscles feel. It definitely works as the creator states. Especially when you push it as hard as I do.

2 thoughts on “189 Max Heart Rate with the Bodyblade?”