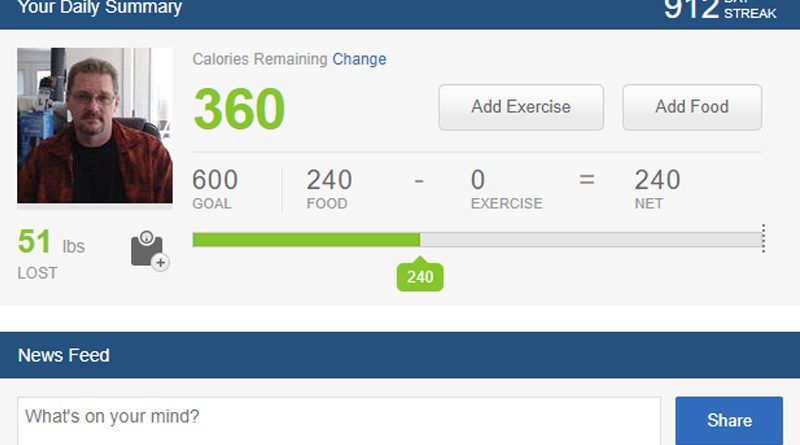 I am quickly approaching 1000 days in MyFitnessPal. This means I have actively logged into the system every day for about two and a half years. And although my personal performance often lacks determination, it’s still one of my favorite fitness apps on my phone.

What 1000 Days in MyFitnessPal Means to Me

Although my weight has yo-yo’d quite a bit over the last couple of years, I am still far better off today than I was in 2015. And a big part of keeping myself from losing complete control is MyFitnessPal.

Why is this app still part of my daily routine?

It’s been an uphill battle for me to lose weight. I deal with stress, depression and other problems on a regular basis. However, I am still 70 pounds lighter than when I first set goals to slim down.

Having 1000 days in MyFitnessPal is a milestone for myself. It demonstrates that I have at least that much determination to continue. I know it’s a small victory, but I’ll take it.

Achieving smaller goals such as this can influence how the future unfolds. Once you get that sense of pride growing, objectives become easier. You’ll find yourself more motivated to keep going.

While I could dwell on the fact that I could have hit my goal weight sometime in 2016, I’d rather remember that I was pushing 300 pounds at one point. At least I was able to stop expanding my body.

Every once in a while, I’ll look back at past meals and see how I was eating. It’s a great way to watch myself grow as a person concerned about living longer. And I am often blown away by how many calories I’ve consumed on days I was terrible.

If there is one thing I’ve learned over the years is that I have a severe problem with snacking. In most instances, I’ll consume nearly four times the amount of calories from snacks as I would from dinner.

It’s something I am still working on, which is why I haven’t hit my goal weight yet.

And I know it’s no excuse, but there are days when I just have a hard time being motivated for anything. I still battle depression occasionally, but I am also so tired all the time.

It plays into sapping my motivation to be healthy.

Want to shock yourself a bit? Record having a meal from somewhere like McDonald’s or Taco Bell. The number of calories, carbs and sodium will blow you away.

And many wonder why obesity is such a problem in the United States.

Another thing that pushes me to hit 1000 days in MyFitnessPal is finding other uses for the app. It’s more than just a food tracker. MyFitnessPal is usable for all sorts of data.

I’m currently working on a blog post for those different uses. However, here is a short list of things that you can do with it:

Using MyFitnessPal is what helped me figure out why I was getting heart burn so often. By monitoring my intake, I found that eating too much can make for a miserable evening.

My point is that you can use the results to find all kinds of things about yourself and how you feel. You may even discover how certain foods influence your mood such as extreme depression or happiness.

Over the last 1000 days in MyFitnessPal, I’ve had to revamp my goal weight. This is because I’ve added more muscle mass than I thought I would. Instead of hitting 180, I think it’s more ideal to push 200.

The way the system is set up, it’s easy to alter your goals. With a few clicks of the mouse, you can change your carbs, proteins and fat intake. This is great if you find that certain diets are better for you than others.

For example, I was consuming more carbs in the past because I was lifting weights. And although I still use my resistance cables, I don’t need nearly as many carbs to power muscles.

My original goal was to dress up like a superhero for Halloween without looking like he has a beer gut. An overweight and out of shape Captain America really doesn’t go over well when going for realism.

To reach this goal, I would have to lose at least another 30 pounds. And in reality, that’s not all that difficult. I already know I am capable of losing the weight. I just need to stay focused.

It’s all about what you can do today. Don’t worry about the end result. Put more emphasis on what you eat and the physical movement in the here-and-now.

I would like to lose 30 pounds inside the next 50 days. Is this possible? Absolutely. Well, as long as I actually stick to my plan. And my 600 net calorie diet will work, if I maintain it on a daily basis.

Focusing on Keeping the Calories in the Green

Something else I learned from 1000 days in MyFitnessPal is the days I keep the calories in the green are some of the best I’ve felt physically and mentally.

I tend to sleep better, have a better overall mood and less aches and pains when I burn more than I consume. This is especially true after adding in more health-minded dishes and snacks.

As long as you’re willing to pay attention to the foods you eat and monitor your progress, MyFitnessPal is an incredible tool.

Because I have my calorie goals set so low in the app, I need to focus more on getting enough activity to eat. In reality, a 30-minute workout burns enough to warrant this.

It’s all about intake versus output, and MyFitnessPal can help with that aspect. Especially if you connect it to a fitness tracker like a Fitbit Charge 2.

Getting Up and Out

Like I said, you need to burn more than you consume to lose weight. This is kind of oversimplifying the idea, especially since it greatly depends on the food you eat. However, physical activity is always going to play a role in fitness.

My problem is not getting out enough. I work and play from my desk at home. As a freelance writer, I don’t have an office to go to or have to travel in public in any form.

It’s getting to the point where I am debating on getting a part-time job just so I get out of the house and meet people.

I love the Xbox Kinect at home, and it’s how I’ve lost a large portion of my weight. But there are days when I want to go somewhere and do something. The problem is I am broke and without a car.

And the street I live next to is horrible for walking as the fumes from passing cars can easily choke a donkey.

Still, I need to find ways to get out and be more physical. Luckily, I have some ideas for at least setting up a practice net for golf in the back yard.

Less than 3 Months to Go!

I am fairly confident I can reach my goals over the next three months. All it takes is focus and determination…two things I often lack. It’s a hard road, but closing in on 1000 days in MyFitnessPal helps me stay the course. 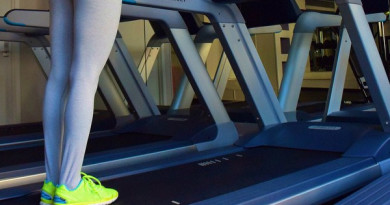 Is 20 Minutes Per Day Enough for Fitness? 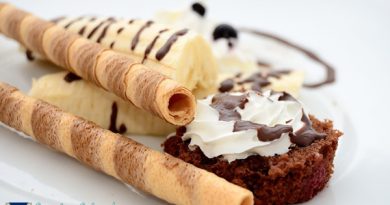 6 Healthy Ways to Deal with a Fondness for Sweet Snacks 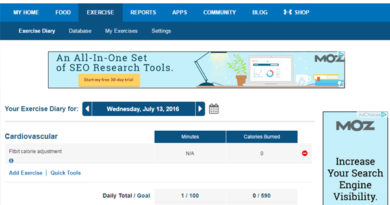 How to Add Ab Workouts to MyFitnessPal