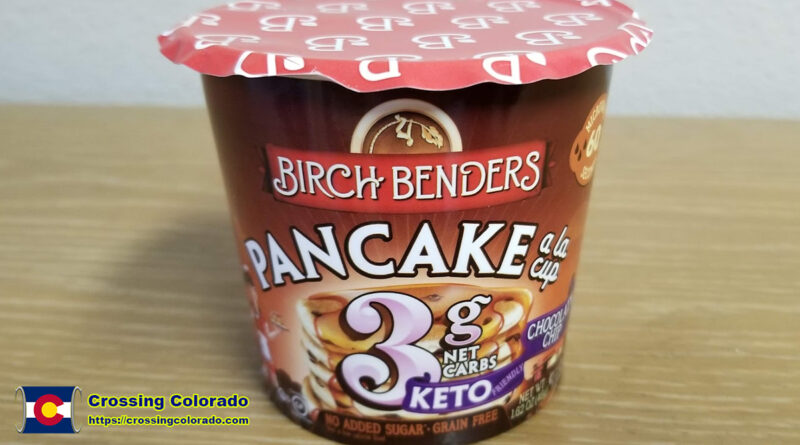 I am a fan of microwavable snacks and meals. For one thing, I’m just too busy to really cook much throughout the day. So, it just made sense to try the Birch Benders Chocolate Chip Pancake a la Cup. And, it wasn’t a disappointment.

As with most keto snacks I’ve had lately, Birch Bender cups are actually not all that bad. Although the Cookie a la cup may need a Splenda packet or two next time, this one was a bit better in overall taste.

What is Chocolate Chip Pancake a la Cup?

Like other Birch Benders a la cup products, this one is a microwavable dish that takes just over a minute to make. It delivers a fluffy pancake ready to eat and is tailored for keto and other low-carb diets.

With a fairly low calorie count, it is ideal for those looking to have healthier alternatives.

The Pancake a la Cup is convenient to take with you or just having a quick bit at home. And because it is high in protein, it works as a good supplement.

What Can You Expect from the Pancake a la Cup?

Overall, the product wasn’t too bad. The only real issue I have with it is also something that is quite common with keto-versions of snacks and meals.

The price per unit.

Still, it’s probably something you might want to at least try for yourself if you’re doing specific low-carb diets.

Not Too Bad of an Overall Taste

If you’re looking for a chocolate chip pancake dripping with maple taste, that’s not what you’ll find in the Chocolate Chip Pancake a la Cup. However, it does have a decent enough pancake taste without the sugar sweetness.

Like the cookie variation, I’m wondering if adding a Splenda packet or two would make a difference.

In any case, the overall taste of the pancake is decent enough. It’s a lot better than some of the other things I’ve tried to choke down recently.

Although the pancake part could use a bit of sweetening, in my opinion, the chocolate was actually pretty good. It didn’t have that weird, waxy taste you’d find in cheap chocolate products.

Not to mention a chocolate-like chemical after taste.

This product had none of that and actually had a good chocolate appeal.

If you’re counting net carbs, the Birch Benders Chocolate Chip Pancake a la Cup only has 3g. Although its total carbohydrate count is 17g, a lot of it is dietary fiber and sugar alcohols.

This means that the product fits exceptionally well with keto and other similar diet plans.

Personally, I prefer to count the total number of carbs while trying keto. That way I know without a doubt that I’m keeping within my goals for the day.

Out of all the a la Cup products I’ve tried thus far, the pancake version has quite a low calorie count. At just 210 for the entire cup, it’s a bit lower than a variety of alternatives.

Though, most microwavable pancakes I’ve seen are far heavier in sugars and overall carbs. In comparison, the Aunt Jemima variation sits at 230, but with 42g of carbs with a lot more actual sugars.

In the grand scheme of things, this product is still a lower alternative.

If you’re looking for a good protein snack to embolden your workout, the Chocolate Chip Pancake a la Cup has 7g at the ready. Although this is a tad lower than other “protein” pancakes on the market, it has a lower amount of everything else in comparison.

For instance, I’ve seen cup pancakes tailored for high protein that had more than 60g of carbs, most of which was sugar.

Of course, this also depends on your health and fitness goals. For simply losing weight, then this is probably the better option.

Kind of the Expensive Side, Even for Keto Foods

Out of all the keto cup snacks I’ve had to date, this is probably among the more expensive. It can range around $3.50 per cup, depending on where you buy it from.

This puts the pancake Birch Benders a la cup at about a dollar more than the cookie product I mentioned earlier.

However, when compared to other microwave cup pancake brands, it’s really not all the much more. In some cases, it’s around $0.50 higher.

Probably Better as a Meal

Given the nature of the product and how it fluffs to three times its mix size, it’s probably better as a meal than a snack. Then again, what do I know? There are people out there who call Taco Bell meal deals a snack.

But given the overall price of the product, the amount of pancake you get, and the calorie count, I can see it as a great breakfast.

Where Can You Get Them?

We bought this one at King Soopers, but I have seen them at the larger Walmart and Target locations. Given the popularity of the brand, you might also be able to find them in a variety of health food stores.

And of course, there’s always Amazon, which would probably save you a few bucks by buying them in bulk.

Try the Chocolate Chip Pancake a la Cup for yourself!

In any case, I’m sure you can find them easily at your local markets.

Will I Buy the Product Again?

Although the overall taste was pretty decent, they are a bit more than I usually like to spend on a meal or snack. Then again, most health foods are.

The convenience factor is something else to consider, especially if you’re like me and don’t have a lot of time in the morning for making breakfast.

Add a bit of water, pop the Pancake a la Cup in the microwave for 60 seconds, and you’re good to go.

To be perfectly honest, I’m not sure if I will buy these again. Although they’re great for keto-friendly diets and other variations thereof, it’s the price tag that makes me hesitate.

Then again, I’m also on a bit of a tight budget when it comes to food. You may not think anything about the price.

If they were a tad cheaper, then yes, I would most likely buy them again. I am just poor folk and can’t afford some things.

I’ve been a bit leary about anything keto-related. I think part of that has to do with a few bad experiences in the past. Luckily, the Birch Benders Chocolate Chip Pancake a la cup was a pleasant surprise.

It keeps the calories and carbs low while providing a good taste. What more can you ask for?