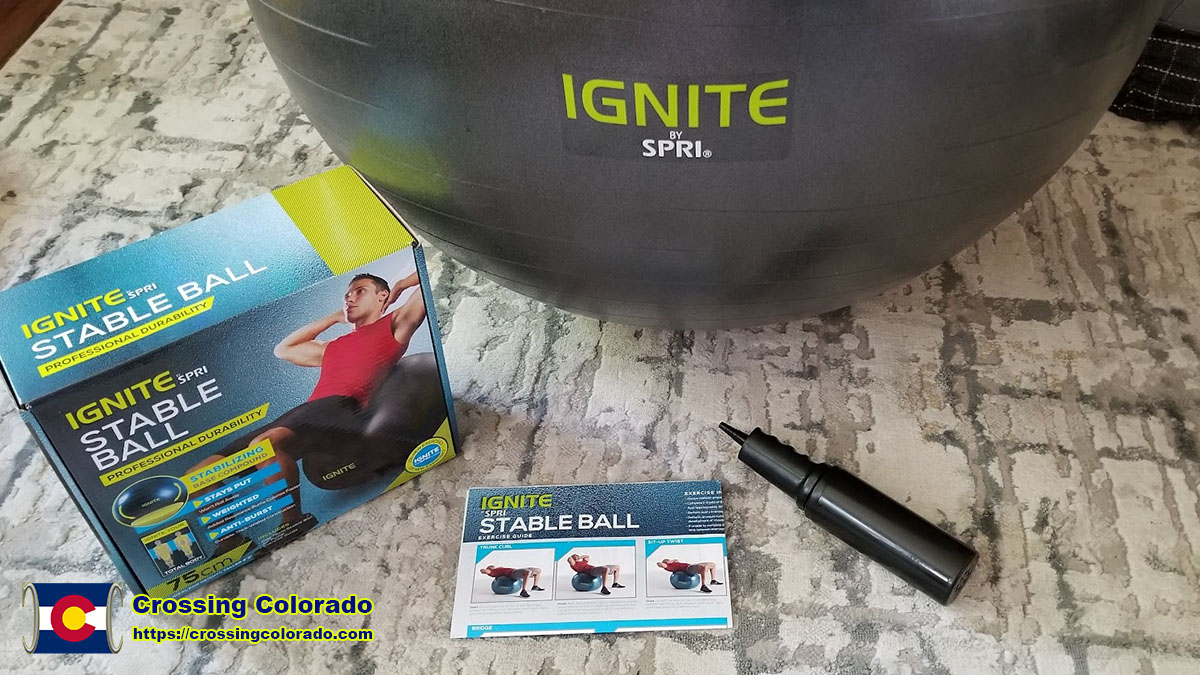 Having home workout equipment available lets you exercise in comfort. Though, you still need to find the motivation to use the equipment you buy. Today, I’m going to break down the Spri Weighted Ignite Stability Ball and why it’s one of the most used pieces of exercise gear in the house.

Mostly because it’s quite versatile, as home furnishings go.

It can be much more than just something you inflate and use once per month. In fact, I don’t think there is a single person visiting my house who hasn’t used it as a chair in the past year.

What is the Spri Ignite Stability Ball?

Swiss ball, exercise ball, stability ball, they are all pretty much the same thing. Essentially, the Spri Ignite Stability Ball is an inflatable ball that you use to perform a vast array of exercises.

The ball is made with a durable rubber with what sounds like some kind of sand that gives it a bit of weight. This ensures the ball is more likely to stay in place as you work out.

The Spri stability ball can come in a variety of sizes ranging from 55cm to 75cm. The one I have in this review is the larger, 75cm variant. It’s perfect for people over six feet tall.

I’m having a hard time finding my exact ball online, but it appears the maximum weight can range between 300 and 500 pounds depending on the type of ball you have.

Now, not all exercise balls are “stability” balls. You can get some without the sand that weighs less when inflated. Personally, I’d rather have the weighted ball.

How Well Does a Spri Stability Ball Work?

At first, I wasn’t sure if I was going to like Swiss balls. We bought the first one several years ago, and I believe it was a Spri. It was whatever Walmart had back in 2015.

After learning a few of the different things you can do with an inflatable exercise ball, it kind of grew on me.

I recently purchased the Ignite stability ball, which closely resembles the “Elite” version from Spri. I am wondering if they rebranded the type. At any rate, it’s virtually identical to the one I had for a couple of years before an unfortunate popping.

So, how well does the Spri stability ball hold up?

Such a Pain to Inflate

When you buy the largest ball, expect to spend a bit of time inflating the thing. It comes with a hand pump in case you don’t have anything at the house to use. But the hand pump is an extremely poorly designed device.

It comes apart relatively easily. At one point, it pinched my hand as it separated and quickly slammed together while pumping.

I highly suggest using another method of inflating the ball if possible.

I’ve used a few cheap exercise balls in the past. Some of which felt like little more than beach balls. However, the Spri stability ball has a nice feel to the rubber. It’s rough with ridges, which prevents slipping while exercising.

The last thing you want to do is slide off your ball onto a hardwood floor.

In fact, the last one that eventually popped was extremely used by everyone in the house. In reality, I’m quite impressed with how long it lasted. There wasn’t a single day that went by when someone didn’t use it for exercise, as a chair, or simply to bounce because they were bored.

Of course, this can be said about any stability ball. You can use it in a myriad of ways to amplify a workout. For example, I use my Spri stability ball as a bench for when I’m doing dumbbell flys. This keeps my lower back, glutes, and thighs flexed.

Unlike a bench when your backside can relax because you’re not supporting your weight.

Comfortable to Lay Across

There are times when I am talking with someone in the living room and I slide into a laying position onto the exercise ball because it’s comfy. This is another highlight when using the stability ball rather than a traditional workout bench.

I’ve laid on some hard surfaces when doing presses and flys. I would much rather use the air-filled ball over a more solid table.

A Bit Large if You Lack Space

As I said, there are varying sizes of the Spri stability ball. But, even the smaller ones can take up a bit of space if you don’t have the room for it. Even in my large living room, I often have to roll it around as it gets in the way quite often.

However, I’ve opted to keep the exercise ball in the living room as a seat instead of buying a chair. Besides, literally everyone who comes to my house uses it as such. And everyone has to bounce on it while sitting.

I guess you can call it a fun piece of furniture in the house.

Affordable for What You Get

The overall cost of any Spri stability ball is decent for the quality of the unit as well as what you can get out of it. Like I said, I use it as a piece of furniture more often than not.

The cost can range from about $15 up to $70, depending on the type and size. This one was a $25 stability ball that has been through a lot of use in the past few weeks.

If you’re looking for a piece of cheap home gym equipment without the cheap product feel, Spri does a good job when it comes to overall quality.

Can Be Used Anywhere

Unlike a workout bench, the Spri stability ball can easily move from one room to the other. It’s lightweight and easy to transport.

There’s been a few times when I moved the ball into my bedroom to work out as children play the Xbox in the living room. It’s even been used in the kitchen as a bouncing chair while someone cooks or bakes.

I’m not exaggerating when I say that the ball is used in some form on a daily basis.

Is the Spri Stability Ball Something Practical for Home Fitness?

The only real downside to having a Swiss ball in the home is the size of the unit. For those who don’t have a lot of room available, it might not be a good choice.

However, in a home like mine, it fits well. Mostly because I don’t have a lot of living room furniture to begin with. And judging by how often people sit and bounce on the Spri stability ball, I really don’t need anything more than what I have.

Even if the couch is empty, people will often sit on the ball instead to talk and bounce. It’s almost like a fun ride that teens and adults seek out.

You can use the device for everything from dumbbell presses to working on your core through planks or Swiss ball jackknives.

Aside from the Xbox Kinect, the Spri stability ball is probably the most used piece of exercise equipment in my home.

Where Can You Find It?

You can find Spri products just about anywhere. I bought the first one from Walmart and this new one from Target. However, you have more options available by going through something like Amazon.

Try the Spri Stability Ball for yourself!

Since I rarely visit stores specializing in workout equipment, I don’t know if you’ll find Spri exercise balls there. I’m sure they would have other Swiss balls, though.

Is the Spri Stability Ball Something I Would Keep Using?

I’m fairly sure I already answered this question above. After using the stability ball for the past several years, it’s kind of hard going without. It’s become quite the fixture in the house, and the living room looks empty without one.

When the last one finally gave up the ghost, everyone was missing it and I had to get a replacement as soon as I could.

Even if you just use it for a seat while playing the Xbox, it’s hard not to bounce, which uses your thighs. So, no matter what, you’re getting some kind of a workout when trying to balance on the ball.

The only thing I would change with the Spri stability ball is the hand pump. It’s a hell of a workout just inflating the ball, especially when you buy the biggest one they have.

The pump is quite rickety, awkward, and doesn’t work all that well. Next time, I’ll use the bicycle pump.

If you’re looking for a piece of exercise equipment that has a lot of potential, the exercise ball can go a long way. With literally hundreds of exercises you can do, it can help work out virtually any part of your body.

Crunches, planks, weights, jackknives, you can get it all with a Spri stability ball. 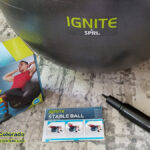 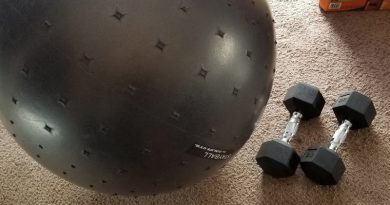 My Dumbbell Micro Workout for Desk Jockeys at Home 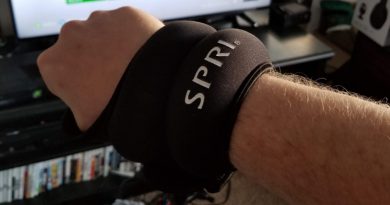 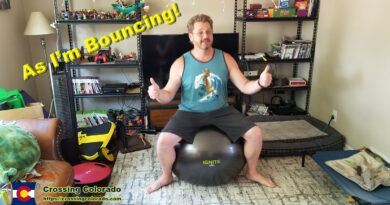 7 Great Benefits of Using a Swiss Ball at Home